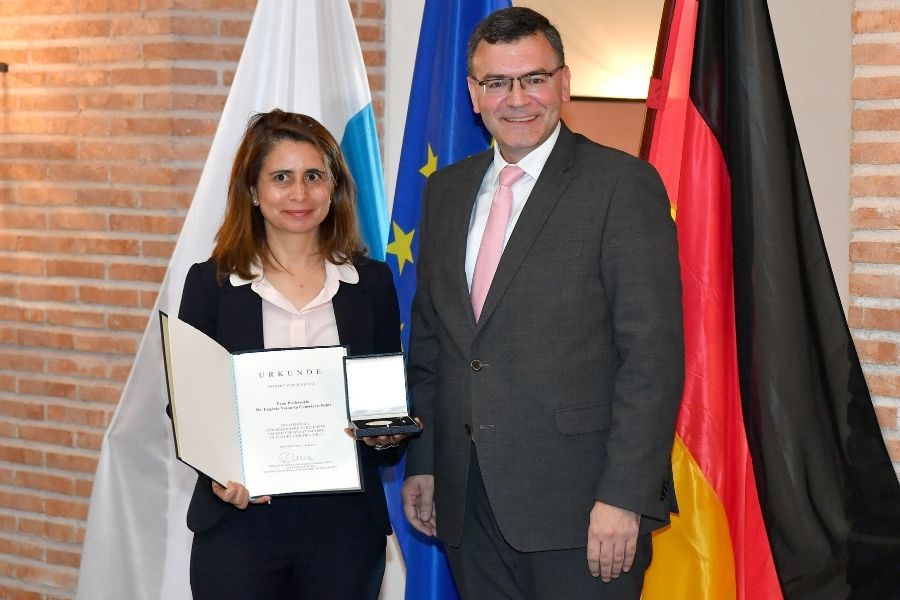 Bavaria’s Europe Minister Dr. Florian Herrmann presented the Bavarian Europe Medal to Prof. Eugénia da Conceição-Heldt and twelve other deserving individuals on Monday. Conceição-Heldt is Professor of European and Global Governance at the Technical University of Munich (TUM), Reform Rector of the Hochschule für Politik München (HfP) and Dean of the TUM School of Governance. Since 1990, the “Medal for Special Services to the Free State of Bavaria in Europe and the World” has honored people who have rendered outstanding services to the Free State of Bavaria in a united Europe or who have contributed to Bavaria’s international standing in the world.

“If creativity, innovative capacity and intellectual dynamism are our raw materials of the 21st century, you are one of our greatest sources of future success with your work at the School of Politics and the TUM School of Governance,”

said State Minister Herrmann in praise of Prof. Conceição-Heldt’s achievements. The political scientist thinks and works in a European and transatlantic network and ensures that science remains attractive and relevant in a digitalized world full of acceleration and new trends, he said. Prof. Conceição-Heldt’s research interests include European integration and the causes and consequences of competence transfers to international organizations. She has held the Chair of European and Global Governance since July 1, 2016. On that date, she also took up her post as reform rector of the HfP.